Québec wishes to use the 150th anniversary of the Federation to renew its relationship with all citizens and with its Canadian partners by focusing on an approach to federalism that recognizes a plurality of ways of belonging. This approach is based on values that are widely shared in Canada—democracy, openness and respect—and also on the promotion of all dimensions of diversity, whether individual or collective. Its primary goal is to re-establish the conditions needed to define a shared understanding of the principles that should govern our country.

To ensure the establishment of this shared understanding over time, the Government of Québec believes that a clear statement is needed to reiterate who we are as Quebecers and to express our desire to play our role in Canada to the full while affirming our difference.

Québec is free to make its own choices and able to shape its own destiny and development. It has chosen to be part of Canada, and this choice is far more profound and significant for Quebecers than a mere cost-benefit calculation. Being part of Canada generates major economic benefits, but the choice to be part of Canada also relates to a sense of belonging.

Quebecers are attached to their Canadian citizenship, which is viewed with envy around the world. They can see signs of their history throughout Canada, and can note the progress of their shared venture and the hopes for a better world built on cooperation and solidarity. In addition, Québec has been able to grow and develop its national identity within the Canadian federal framework.

In short, the identity of a vast majority of Quebecers is based on an allegiance to Québec and a sense of belonging to Canada, and is deeply rooted in our nation’s history. Canada is a richly diverse country, and must today recognize all dimensions of diversity and welcome national differences.

Quebecers, fortified by a deeply-held national identity that they hope to see rightfully recognized, have chosen to build the future alongside other Canadians.

Who we are as quebecers

Québec’s specific identity is based on certain fundamental elements, including:

A reciprocal willingness to cooperate

Canada’s 150th anniversary provides an opportunity to resume a meaningful dialogue on the evolution of federalism. However, the approach preferred in the past, when constitutional changes of fundamental importance for the country were negotiated behind closed doors, is no longer appropriate. The dialogue must recognize the profound changes that have transformed Québec and Canada since the Meech Lake Accord, and re-establish the bond of trust that has been placed under strain in recent decades.

To strengthen trust between the federative partners, the Government of Québec intends to renew the conditions for dialogue, which must now include not only governments, but also civil society, the Aboriginal peoples and French-speakers in Canada.

The Constitution, and any negotiations to amend the Constitution, should be seen as the end-point rather than the starting-point of the dialogue. However, such a complex process cannot be held to a schedule—there will still be work to be done after the 150th anniversary.

The Government of Québec

To achieve its objectives, the Government of Québec intends to use all the means at its disposal. In concrete terms, Québec’s desire to play a more dynamic role in Canada will be reflected, first, in Québec’s government structures.

Canadian relations will now be coordinated by the Secrétariat du Québec aux relations canadiennes (or SQRC, the Québec Secretariat for Canadian Relations), which will succeed the Secrétariat aux affaires intergouvernementales canadiennes (or SAIC, the Secretariat for Canadian Intergovernmental Affairs) and play a more prominent role as a strategic advisor in the area of Canadian relations in order to promote and defend Québec’s interests with its federative partners. In addition, the SQRC will work actively to create additional bridges and possibilities for dialogue with Canadian society at all levels. The SQRC will implement a new structure for strategic monitoring, reflection and action, and will seek new input from all government departments.

The government, under the SQRC’s coordination, will ensure that each of its departments has a unit for Canadian relations, under the authority of their respective deputy minister. With the assistance of this network, the SQRC will coordinate the defence and promotion of Québec’s interests with its federative partners and with other stakeholders in Québec and elsewhere in Canada. The network will help the SQRC determine the possibilities and opportunities for alliances with federative partners on matters of shared strategic interest.

In its relations with the federal government, the Government of Québec intends to participate actively in intergovernmental forums and to play a leading role in the development of a constructive, harmonious and mutually-beneficial relationship. The Government of Québec is committed to also participate fully in the definition and implementation of joint priorities with the federal government, provided its areas of jurisdiction are respected.

Québec’s relations within Canada are not limited to its federal-provincial relations, but also include a long tradition of relations with the other provinces and territories. Québec intends to actively continue its collaboration with its partners, with the ongoing objective of maintaining and developing beneficial relationships within the Federation. It will multiply its alliances, where suitable, to advance not only its own interests, but also those of Canada as a whole.

In addition, the Government of Québec is now more than ever determined to promote the Francophonie to help gain recognition for the rights of the 2.6 million Francophones and Francophiles outside Québec. More specifically, it plans to support actions to promote the immigration of French-speakers, an essential component in the growth of the country’s French-speaking population.

Québec intends to increase its presence on the Canadian stage to make its voice heard and ensure that its concerns are better understood. This will be achieved through active involvement in the university sector, with business and social groups, on traditional and social media, and in all places where Québec’s voice must be heard to project the vision and goals of its government.

Québec will use all relevant tribunes to promote its vision of Canada in which a plurality of ways of belonging is supported through openness, mutual recognition and respect for individual and collective diversity.

The links between Quebecers and other Canadians are deep, long-standing and durable. They occur not just between governments and institutions, but unite individuals and civil society as a whole. These links came into being over time and outline a history that contrasts with the string of political and constitutional disagreements that have marked governmental relations between Québec and Canada. They reflect thousands of interactions that occur every day in the worlds of business, commerce and charity work, through union and social solidarity organizations, in the fight against climate change, in classrooms across the country where a love of French is instilled, and during the trips made by Quebecers who travel or live in other parts of Canada, just like the Canadians who come to discover or settle in Québec.

Young people are a good example. The constitutional episodes of the years 1970 to 1980 and 1990 left a long-lasting mark on Québec-Canada relations, but do not necessarily resonate with or have the same meaning for young people as they do for older generations. This is reflected in recent surveys on young Quebecers’ attachment to and identification with Canada, which have increased significantly in recent years. Globalization, increased mobility, and the information and communication revolution, are all realities that change the ways in which we see the world, travel and do business. Young Quebecers live at the centre of this upheaval and, as a result, are agents for change and open-mindedness.

In their own way, young Quebecers are reinventing Québec, Canada and the world. It is their turn to prepare the future. The Government of Québec hopes to increase the opportunities for discussion and cooperation, allowing young Quebecers to express their identity throughout Canada through intercultural exchanges, school exchange programs, research internships, language and cultural immersion programs, and mobility programs for students and young entrepreneurs hoping to enter neighbouring markets. An increase in these exchanges will raise the profile of Québec and the French language, support mutual understanding, and strengthen a shared sense of belonging. 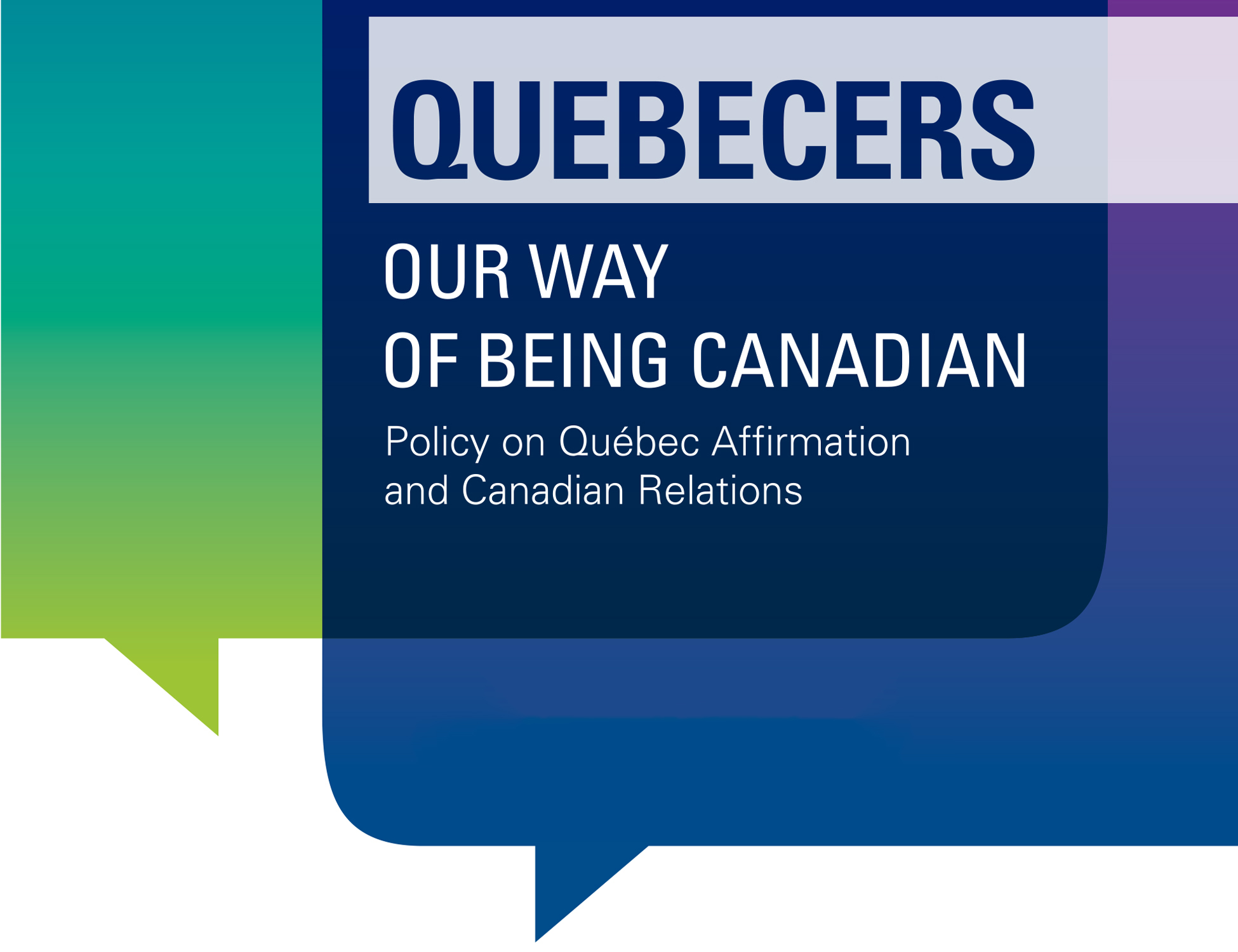