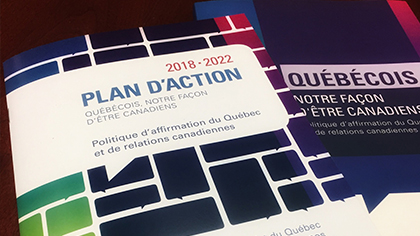 Québec City, May 2, 2018. – Since the release of the first Policy on Québec Affirmation and Canadian Relations – Quebecers, our way of being Canadian, on June 1st, 2017, dialogue has been at the heart of an expanding action by the Québec government in the area of Canadian relations. The

2018-2022 Action Plan (english version available soon) of the Secrétariat du Québec aux relations canadiennes (SQRC), unveiled today, sets out the actions planned by the Government of Québec to continue the implementation of the Policy.

This Action Plan is structured around the three guiding principles that underlie the current and future dialogue in which Quebecers and all Canadians are invited to participate:

The Québec state is providing its government administration with the tools it needs to make Québec and its specificity better known, to increase its outreach in the economic, social, academic, cultural spheres and as part of the Francophonie, to defend its areas of jurisdiction, and to improve mutual understanding and living together within the Canadian federation.

The set of measures outlined in the 2018-2022 Action Plan will strengthen the ties between Quebecers and other Canadians and establish the conditions needed for a dialogue about the future of living together within the Canadian federation. The Policy on Québec Affirmation and Canadian Relations recognizes that constitutional change can only take place without a crisis once Quebecers and other Canadians have come to know each other better and have established closer ties, and it invites them to pursue these goals.

“We now have a roadmap for continuing the dialogue aimed at building Canadian relations that are based on better mutual understanding for the benefit of all Quebecers and all Canadians. Through this Action Plan, the Government of Québec is providing itself with the means necessary to implement its vision of the Canada of tomorrow, one which, in addition to individual diversity, recognizes collective diversity and plural belongings.”

Schedule – Financing for the implementation of the Action Plan